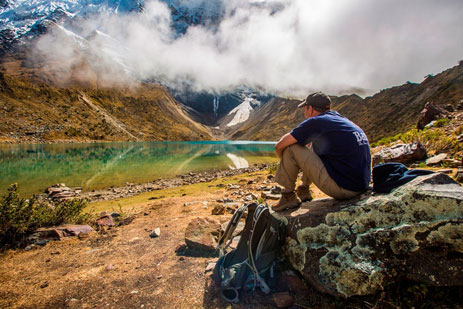 It’s a search that has gone on for ages. Jesus asked, “Who do people say that I am?”

And Peter spoke out, “You are the Christ the Son of the living God.”

But six days later it became this truth became evident. This was no ordinary rabbi.

After six days Jesus took with him Peter, James and John the brother of James, and led them up a high mountain by themselves. There he was transfigured before them. His face shone like the sun, and his clothes became as white as the light. Just then there appeared before them Moses and Elijah, talking with Jesus. While he was still speaking, a bright cloud enveloped them, and a voice from the cloud said, “This is my Son, whom I love; with him I am well pleased. Listen to him!”

James, John and Peter- were flat on their faces. They saw the manifestation of Peter’s claim.

Indeed he was the Christ the Son of the Living God. His glory is far greater than anything we will ever conceive him to be in this life. When will we disconnect from the temporal. When will we go deep into the wilderness far above the sound waves of normality into the presence of a penetrating, transforming vision of real glory.

When will our churches become so transfixed with Jesus that we view everything else as irrelevant and passé?

Can we be the containers of that kind of glory?

Can we get that close to the fire of the divine?

Can our lives be vessels?

Lord I am not content with a half lived, just getting by, moderate obedience.

Lord I am fed up with my own flesh, my need to be right, my worries that I may be hurt

My constant obsession to be noticed

My bent toward habitual sin

My instinct to judge

My relentless need to be on center stage.

To shine in my own feeble fluctuating temporal glory.

But he calls us to the mountain-

To Mount Ararat to begin again-

He calls us to the Mount of olives where we experience our own night of Gethsemenee.