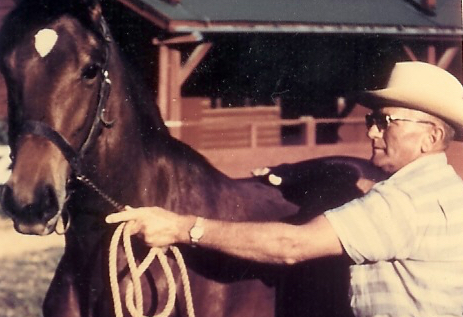 My grandfather was 5 feet & 135 inches tall. Actually he was well under 6 feet but he was a giant, legendary figure. I grew up during my preschool days in Los Angeles. As a knee-high kid, my brother and I would fly for a number of weeks to live in Dry Prong Louisiana. Dry Prong is near Tioga. Don’t know Tioga? Let’s just say that Dry Prong built the boondocks located in Tioga. Dry Prong couldn’t afford boondocks. Talk about culture shock! We loved our time out in the sticks learning about possums, grasshoppers, cow pies, mosquito nets, feather beds and fireflies.

We learned a new dialect. Far was pronounced fur. Cool Whip™ was “Cool Werp.” And “tar” could mean anything from, “I’ve got a flat tar” to “Doesn’t our town have a great looking water tar?”

We called my grandfather Goodbuddy. He had an 8th grade education and a small farm in the sticks of rural central Louisiana. I still have old reel-to-reel recordings he would mail to Mom and Dad during our longer visits. I love hearing him say my name on those tapes. “Matthew’s a good little boy. Got him trained to the outside and the hose.” Interpretation: He taught me that I didn’t need to come inside to use the bathroom or get a drink.

He was introverted but he had plenty of stories. Funny ones. Most involved the usual suspects: his oil field bunkhouse mates, my dad, my grandmother and the 10 or so dogs that he programed to hate raccoons with the fire of a thousand suns.

He was country but he hated country music or as he called it– “Honky-tonkin” music. He said it like he was cussing. In fact, I was around thirteen before that I realized you could say “honky-tonk” in public.

He wasn’t the best at formal, public prayer but he did pray. There are more than a few stories of him laying face-down in the middle of his pasture praying before the dawn. This made him taller than most.

He taught me how to eat sardines with saltine crackers, how and when to spit, how to shake a hand firmly, how to make a lady feel important, and how to keep my mouth shut when I didn’t know what I was talking about. And to have the temperament of a pit bull when it came to defending children.

He was the kind of man that loved everybody but grandkids were in a class by themselves. I don’t have grandkids. I’m praying I’ll get to have some in the future. I will be an awesome grandfather. I was trained by the best.