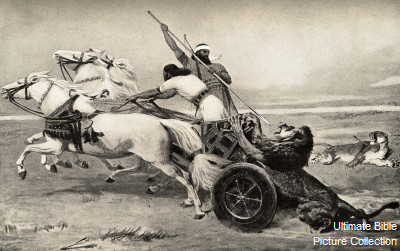 Jehu storms his way through 2 Kings 9 and 10 with fury and reckless abandon. He stands in history as one who did God’s will but with dangerous and ungodly means. The story illustrates God’s disdain of evil and idol worship when it ravages God’s people. In verse 20 we see that Jehu had a reputation of being a fast and furious driver.  In our day, he’d be in the tricked-out sports car flooring the gas and refusing to signal his lane changes. His story lands him the reputation of a sports hero who paid fines which were almost half his salary. Although he fought valiantly for God, you kind of get the feeling as you read the story that Jehu wanted the story to be more about Jehu.  It’s no wonder why Elisha gave his prophet apprentice the instructions for anointing Jehu to anoint him, tell him that he’s king and then run for dear life. This was one bad prince!

Joram, one of the sons of Jezebel found himself in a difficult position. The rebellion and witchcraft of his mother Jezebel caused him to be the focus of target practice. He enjoyed the life of power and passion in the company of demons, perhaps never considering that there would be a price to pay for his world view. No wonder he asked fearfully, “Do you come in peace?”  He probably already knew that he was a dead man.  This was, remember, Jehu. The fast and furious driver for God. God’s question to us at the end of our lives won’t be “were you passionate?”  People are passionate for lots of things from football to funnel cake. Just because you live passionately doesn’t mean you have a free pass. Hitler was passionate. Charles Manson was passionate. Joseph Stalin was passionate. Kurt Cobain was passionate. The real question is- what is the source and purpose of your passion?  As I think about this issue, I can’t help thinking of James Ray, the self-help spiritualist who motivated people to enter the sweat lodge in Arizona where three people died last year. He’s a passionate leader but a leader with no source of real godly guidance and is now paying the price for his pied piper philosophy. Our passion must be funneled into the right direction. And just so you know, there’s only one right direction.

Jehu encountered Jehonadab whom was a leader of a nomad tribe, living in the desert and keeping the Hebrew traditions of his ancestors. Jehu recognized his faith and asked “Are you with me?”  Jehonadab said yes and they joined forced. Jehu invited him to see His zeal for the Lord. Jehonadab is an archetype for accountability.  When we are in a spiritual battle, we should never go it alone.  We need people around us to evaluate our actions and to partner with us. Solomon recognized this when he said in Ecclesiastes that two are better than one. There is no room for spiritual loners.

If you aren’t, you’re missing the real excitement of life. God meant life to be a shared experience, especially when there is a battle to be fought.

It’s the story of how Jehu punked the idol worshipers. Jehu gathered all the usual suspects of idol worship and led them to believe that he, too, was a Baal worshiper. He called them all to a worship celebration of Baal, and took on the disguise of a true Baal believer. Then at the opening chorus of the first act of worship he called on his army to mow them all down.  This is what some professors would call situational ethics- the ends justifying the means.  Is it OK to lie or deceive if it accomplishes a purpose? Is it OK to sleep with someone you love but aren’t married to? Is it OK to have an abortion if it will save your reputation? These efforts to grey the lines or to fudge the story always come back to bite you. (Ouch!) Christian character is telling the story straight and doing the right thing, even if it causes pain.  How can God get the glory when we have a strong sense of ethics?

The Results of Strong Passion and Weak Character
Read 2 Kings 10:30-32

Verse 31 of this chapter tells the sad end to this incredible anti-hero. The bad boy Jehu who put the pedal to the metal, destroyed the Baal worshipers, and did away with old wicked Jezebel ended up not being true to the God that anointed him as ruler. How utterly common this is! Success often makes fools of believers. We are so easily tempted to believe that we can have a divided heart and still be a success as a believer.  What can you do today to prevent such heartbreaks in the future?