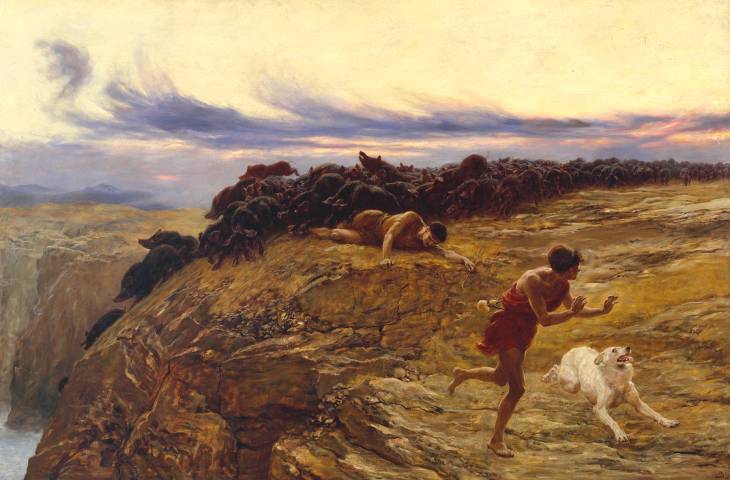 Our world is obsessed with the paranormal. Horror and the supernatural are top at the box office. Paranormal games sell millions in the gaming industry. Tales of zombies, rising bed sheets in the middle of the night, UFO’s threatening to steal all our resources, and vampires hitting on hot girls- It’s all there! As I walked through our public library I was dumbfounded to find three shelves of horror and paranormal teen fiction books. Those books dominated that section of the library. Why is this? Some might argue that we all want to escape from the normal life but I would argue that students and adults take in these kinds of resources to better understand the real life that hovers under the radar of this planet. They are seeking explanations for the fantastically unpredictable and ever-present nature of the spirit world. What they find in most cases, is a misinterpreted gumbo of random theories and propositions about death, evil, and the invisible battle that rages within them. The Bible provides an interpretation of the supernatural and spiritual aspects of the cosmos. It doesn’t dismiss the concept of demons and horror, but rather gives us an opportunity to process its reality in a logical, orderly manner. Just look at the border war that took place between Jesus and demons in Mark 5

They Travel in Herds

They went across the lake to the region of the Gerasenes.[a] 2 When Jesus got out of the boat, a man with an impure spirit came from the tombs to meet him. 3 This man lived in the tombs, and no one could bind him anymore, not even with a chain. 4 For he had often been chained hand and foot, but he tore the chains apart and broke the irons on his feet. No one was strong enough to subdue him. 5 Night and day among the tombs and in the hills he would cry out and cut himself with stones.

6 When he saw Jesus from a distance, he ran and fell on his knees in front of him. 7 He shouted at the top of his voice, “What do you want with me, Jesus, Son of the Most High God? In God’s name don’t torture me!” 8 For Jesus had said to him, “Come out of this man, you impure spirit!”

9 Then Jesus asked him, “What is your name?”

“My name is Legion,” he replied, “for we are many.” 10 And he begged Jesus again and again not to send them out of the area.

If you look at the end of Mark 4 you will read about Jesus command over the natural forces of the weather. Now in chapter five, in a small village on the eastern side of the sea Jesus displayed His strength and cunning of the supernatural world. When Jesus enters the town he encounters a maniac. This guy was a mess-living Goth-like in a graveyard, obsessed with death, cutting himself and displaying supernatural strength. This wreck of a man had absolutely no control of himself. But this isn’t a case of a boy behaving badly. There was something much bigger going on here and everyone in town knew it. Jesus came to do some spiritual house cleaning declare this independence day for this man who was probably in his teens. The demons had no doubt who Jesus was and they knew that they had to obey. They wanted to leave but they also wanted to remain in the region. The demonic influence identified themselves as “legion- for we are many.” Our habitual sinful habits operate similarly to demons. They come in packs. Often the alcoholic is also the heavy smoker, who is also the rage-aholic, who is also the absent father. Often the cheater develops a taste for other dishonest acts and creates a maze of lies to spoof a life of integrity to others. We see this often with fallen celebrities, defrocked ministers, and corrupt politicians. One revelation leads to a pack of other moral lapses. They build upon each other. Keep in mind that I’m not proposing that all these posers are demonized but rather that Satan’s traps are often intricately layered and we have to keep our spiritual house clean.

Where are the areas of compromise in your life that, like weeds, have the potential to choke your integrity and relationship with God?

The God of Second Chances

15 When they came to Jesus, they saw the man who had been possessed by the legion of demons, sitting there, dressed and in his right mind; and they were afraid. 16 Those who had seen it told the people what had happened to the demon-possessed man—and told about the pigs as well. 17 Then the people began to plead with Jesus to leave their region.

I’d imagine if you asked the people in that town, “what was the greatest miracle: the storm they heard rumored that Jesus calmed or the deliverance of the town maniac?” I believe they’d say, hands down, it was the deliverance. In such a small town, everyone must have been aware of this guy’s antics, the sorrow of a humiliated family with everyone offering pop-psychology answers to their deepest heartbreak, and the nights he screamed out and woke the babies. THAT was “THE BIG ONE!” That was the miracle of all miracles. Just looking at this teenager and wondering, “What happened? How did this kid surface from insanity. We’ve never seen him sitting peacefully, much less with clothes on!” In fact, the people in the town were so amazed and fearful that one Man could command so much power that they begged him to leave. It’s another example of how people fear change, even when it is good. But only one thought must have been running through the former maniacs mind: “Ah Freedom”

There’s nothing quite as wonderful as freedom, is there? His freedom happened overnight. But sometimes freedom is a series of small steps and right choices. In truth, we are all in recovery. We all have our shameful midnights and our treasured habits that we wish we wouldn’t treasure so. Our solution is to relentlessly, daily return to the feet of Jesus and beg for His mercy.

Where do you need His mercy and second chances today?

Do you fear change?

18 As Jesus was getting into the boat, the man who had been demon-possessed begged to go with him. 19 Jesus did not let him, but said, “Go home to your own people and tell them how much the Lord has done for you, and how he has had mercy on you.” 20 So the man went away and began to tell in the Decapolis[b] how much Jesus had done for him. And all the people were amazed.

No one understands the power of a good story more than Jesus. As he got back on the boat the ex-demonized man begged to join Jesus but Jesus told him to stay and let people know what happened to him. Jesus knew he was more powerful in that town and telling that story. We all have stories and stories are important to the Christian faith. Personal stories are our greatest tool. And yet I’m convinced that many believers don’t know their own story because they haven’t taken the time to reflect on it. In the movie As Good as It Gets, the OCD writer, Melvin Udall, tries to convince his traveling companions, “Some people have great stories, pretty stories that take place at lakes with boats and friends and noodle salad. Just no one in this car. But, a lot of people, that’s their story. Good times, noodle salad.” But the truth is that good times and noodle salad does not a good story make.   It is only when we reflect on the beauty of our own narrative that we will see God’s hand that led us through those terrible falls and amazing rescues. Robert Frost in his famous poem- The Road Not Taken concludes, “I shall be telling this with a sigh some ages and ages hence…” What story will you be telling some ages and ages hence? Those who are so willing to claim that they were able to pull themselves up by their own bootstraps are the ones who really don’t have a story to tell. It’s the ones who realized that they had fallen and couldn’t get up but suddenly encountered a superhero. Now that’s a story! It’s our story and it’s worth telling ages and ages hence.