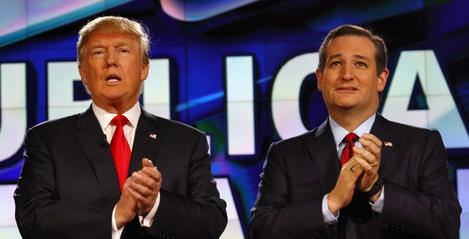 This has been a difficult political season for America to say the least. Campaign presentations are louder, angrier and crazier than this country has ever experienced. However, I hear a faint whisper in my head that says “I’ve seen these people before.”

Who would these candidates resemble if they joined the church?

Donald would be that new believer who has taken over the men’s group that meets in the church parlor on Tuesday night. He is so new to the faith that he has not found his personal filter. He’s cusses while sharing his testimony (which is somewhat endearing but often embarrassing.) People respect him because he just tells it like it is. But DO NOT CROSS HIM. He still has the ability to get hot under the collar about things he doesn’t understand about the church. He’ll rally the deacons to build a building whether you need it or not and before you know it you’ve got a church architecture consultant in your office.

Hillary has the personality of a rogue Women’s Ministry leader. She has lots of leverage in the church and she’s not afraid to go toe-to-toe with you at budget time. She is a stoic serious leader that is married to the life-of-the-party guy who you’ve been trying to disciple for years. He loves Jesus but subscribes to Showtime.

Bernie owns the church thermostat key and keeps a copy of the bi-laws in his back pocket. He is still upset that business meetings are held quarterly and would like to meet with you every day to discuss parking solutions. You love the guy, but you spend more time with him than anyone else.

Mitt is a member with an MDiv who earlier was vying to be the pastor of the church and critiques your leadership aptitude at church fellowships.

Ted is the charismatic staff member that seems to really punch up the numbers on events he organizes. Some of his numbers rival the numbers at Promise Keeper stadium rallies in the early 90’s. His spiritual gift is hyperbole and when you get in a conversation with him you always feel out-spiritualized.

Marco is the upward basketball coach that is on the property and grounds committee, the budget committee, the personnel committee and the committee on committees but he never attends the meetings. Still, he is AWESOME. He creates energy and has lots of cool axioms but he repeats them too often.

John is the quiet man who has amazing ideas for the church but because he is soft spoken, he never gets heard because, face it, Marco, Donald, and Ted are just so dominant in the Long Range Planning meeting. You are kind of afraid he’ll move his letter to Calvary because of all the chatter at your church.

Ben is an amazing guy that you truly love in your church. Kind, gentle, humble. But most of the verses he has memorized are from the Book of Revelations. But who in their right mind could not love Ben?

Take out the substantive issues and important battles our nation faces and these Americans might just remind you of someone you know too! You might even find yourself in one of these profiles. (There are some Marcoisms in my Modus Operandi.)  Remember that God uses the most unlikely candidates in your church to do supernatural things, I only pray that your church, filled with colorful, dynamic personalities will never have the kinds of debates we’ve seen in this election cycle, especially if the topic is carpet color or auditorium temperatures.