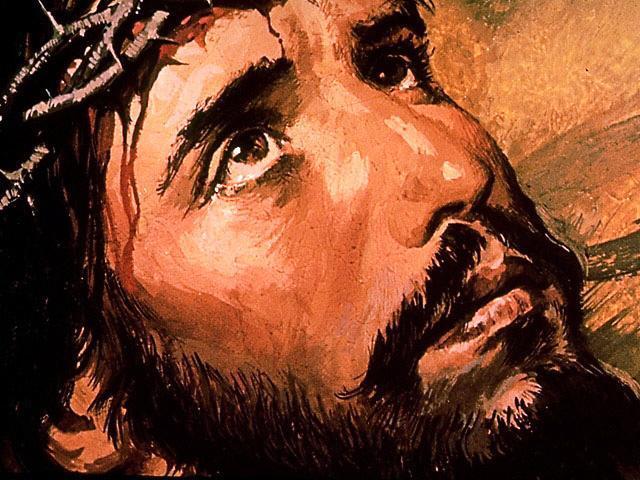 This reading could be used during the Easter season or for a Lord’s Supper service. The voice-over part could be a recorded voice, an offstage voice, or readers onstage.

Scripture Reader 1: “Then Pilate took Jesus and had him flogged.”

Scripture Reader 2: “The soldiers twisted together a crown of thorns and put it on his head. They clothed him in a purple robe and went up to him again and again, saying,”

Scripture Reader 2: “And they struck him in the face.”

Voice-over: Christianity is the laughingstock of our society! It’s for weak-minded people who can’t live their own lives.

Scripture Reader 1: “When Jesus came out wearing the crown of thorns and the purple robe, Pilate said to them, ‘Here is the man!’ As soon as the chief priests and their officials saw him, they shouted, ‘Crucify! Crucify!’”

Voice-over: If there is a God, He has a lot of explaining to do. We are the product of evolution. Jesus was simply an insane leader glorified by the masses. People back then believed in anything.

Scripture Reader 2: “Finally Pilate handed him over to them to be crucified. So the soldiers took charge of Jesus.”

Scripture Reader 1: “Carrying his own cross, he went out to the place of the Skull (which in Aramaic is called Golgotha).”

Voice-over: It’s your body. Don’t let anyone tell you that you don’t have a right to terminate the pregnancy. Take charge of your life. It can all be reversed.

Scripture Reader 2: “When the soldiers crucified Jesus, they took his clothes, dividing them into four shares, one for each of them, with the undergarment remaining. This garment was seamless, woven in one piece from top to bottom.”

Voice-over: We really ought to live together before we even think about marriage.

Voice-over: Did you hear what I heard about Martha? She is the lowest!

Voice-over: You’ve got to be there. The party is going to be wild: free booze, ecstasy, ludes, you name it!

Scripture Reader 1: “Near the cross of Jesus stood his mother, his mother’s sister, Mary the wife of Clopas, and Mary Magdalene. When Jesus saw his mother there, and the disciple whom he loved standing nearby, he said to his mother, ‘Dear woman, here is your son,’ and to the disciple, ‘Here is your mother.’ From that time on, this disciple took her into his home.”

Voice-over: (as to a child) When will you ever grow up! You come here right now. I’m gonna give you a beating you’ll never forget.

Scripture Reader 1: “Jesus said, ‘Father, forgive them, for they do not know what they are doing.’ And they divided up his clothes by casting lots.”

Scripture Reader 2: “When he had received the drink, Jesus said, ‘It is finished.’ With that, he bowed his head and gave up his spirit.”

Transition with a song or prayer.