Tucked behind the glorious parting of the Red Sea, there’s a Jesus story. 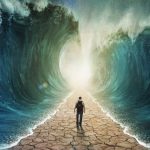 After the exultation of seeing the waters of the Red Sea part, the newly freed nation ran into other issues. A lot of people.  No water.

Isn’t that the way troubles come? As soon as one crisis is averted, another new set of predicaments, equally perplexing, comes-a-knockin’.

A friend goes to hear the results of the scans. The three weeks of being cancer free are followed by the fact that it returned with even greater tenacity than the first diagnoses.

The brother that went into treatment, who’s working the program, going to meetings, and crossing weekly sobriety milestones has a relapse and this time someone else is in the hospitals due to his weekend bender.

The new job that you were convinced was a promotion, turns into a situation that was not clearly explained to you when you resigned your previous job for an apparently brighter career path. Your new boss is a jerk with impossible expectations.

The solution was there right in front of them. A place called Marah that had fresh water, enough for this multitude of weary wanderers of the wilderness who, no doubt, were recovering from Egyptian PTSD. But something was wrong.

So Moses brought Israel from the Red Sea; then they went out into the Wilderness of Shur. And they went three days in the wilderness and found no water. Now when they came to Marah, they could not drink the waters of Marah, for they were bitter. Therefore the name of it was called Marah. (Exodus 15:23)

We find a universal experience here. It occurs when the solution appears but instead of a happy ending and the credits rolling, we see that the problem is not better. It just turns bitter.

Each adversity we face has the potential of manifesting bitterness, regret and disbelief. Life can and will turn as bitter as the thorns on the outskirts of Eden. 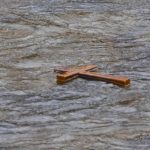 Bitterness is a pernicious evil that lies beneath the surface. We are deceived by it because we have mechanisms in our fallen state which allow us to look happy and seem content while at the same time never really dealing with the root of bitterness. Bitterness grows best under cover. It seeps into the inner workings of our heart and takes root.

The story finds its rescue hanging on the cruel form of a tree. (Exodus 15:25)

God directs Moses to throw a tree into the bitterness of the water and the water becomes sweet.

Here’s where Jesus comes in. In the same way, God threw a tree in the middle of the bitterness of life. The tree was the cross. And in the middle of mess we can taste and see that the waters of any adversity can become sweet.

The cross is God’s way of releasing us from the heavy weight of resentment and bitterness and escorting us into the peace that we never thought we’d attain. Sweet and everlasting.

I appreciate your perspective so much. You have a great gift! Thank you for sharing.