One of the most peculiar backstories of writer and theologian C.S. Lewis is the unusual 30 year motherly relationship he had with Mrs. Janie Moore. When C.S. Lewis served in World War I, he fought alongside Paddy Moore. Lewis returned wounded and Paddy was killed in action. While in the hospital recovering, C.S. Lewis notified his father who promptly replied that he was too busy to see him. However Paddy’s mother, some 30 years older than Lewis did visit. Later Lewis stayed in her home and, according to C.S. Lewis’ brother, it reached the point of almost slavery, where C.S. Lewis attended to her and Moore became increasingly demanding in her old age.

As I read this story, I wondered how Lewis’ life would have been different if his dad had left the office and attended to the needs of his wounded son. I’m sure the story would have been much different. The rejection of a father caused an unhealthy attachment to a woman who found him to be easy prey for her own selfishness. As fathers, 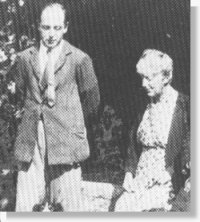 this story reminds us that if we don’t step up to the bat in our kids’ lives, they will seek a replacement for the love and presence we are withholding. Often those replacements are cheap substitutes for the blessing and attentiveness of a father. Our lack of concern could set our kids back for years.

What does it means to exasperate your children? Perhaps it begins by simply ignoring them. To seem invisible is often the worst feeling a child could ever experience.

Elderly women want love. Janie Moore got love from her younger “son” – C S Lewis – for thirty years.
Love made her younger. She practiced John 11:25-26 – “I am the Resurrection and the Life. He who
believes in me shall never perish”. She was not a Christian – but she practiced what Jesus taught:
Motherly women need love. “Mother – behold your son” – Jn. 19:26.